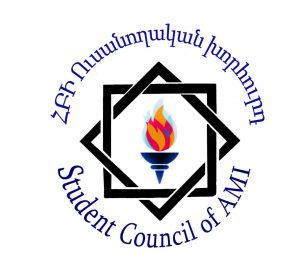 The Student Council of the Armenian Medical Institute is an elective representative body of student self-governance. The Council expresses and advocates the interests of the students, promotes the enhancement of the social role and activity of the students, their social and cultural, scientific, intellectual, artistic, moral and spiritual development.

The Chairmen of the Student Council are as follows:

The Student Council cooperates with

Knowledge is an inestimable value, but the student life is not limited only to classrooms, learning and lectures. The student life becomes more interesting and meaningful due to various intra-university events, one of the initiators of which is the AMI student council.

At the initiative of the Student Council of the Armenian Medical Institute, the intra-university sports games were organized, which were held in the following sports: arm-wrestling, table tennis and chess. The enthusiasm of the students was quite high. The students of different courses of the faculties of General Medicine and Stomatology took part in those games.

As a result of the heated struggle, three winning places were distributed as follows:

In order to celebrate the next anniversary of Yerevan – “Erebouni-Yerevan-2799” at its best, a pre-holiday Community Cleanup Day was organized in the capital, in which students, young volunteers from different HEIs and colleges took part.

On October 8 of this year, the members of the AMI Student Council took an active part in the Community Cleanup Day. “We love our city, it’s our home, and so we must keep it clean” – they are convinced of this.

Football match between the NA deputies and

the chairmen of the student public structures

On the eve of the youth holidays, a football match was organized between the NA deputies and the chairmen of the student public structures.

The match ended with a score of 3:3. The chairman of the NGO “Student Center of Non-State Higher Education Institutions”, the former chairman of the AMI Student Council V. Martirosyan also took part in that match and became a goal scorer, which contributed to the draw of the match.

A concert of Aram MP3 and Sevak Khanagyan was held at the Karen Demirchyan Sports and Concerts Complex, dedicated to the International Youth Day.

The AMI students were also present at the concert. They expressed their gratitude to the Youth Foundation of Armenia and the Youth of the Republican Party of Armenia for making the international student holiday beautiful and unforgettable.